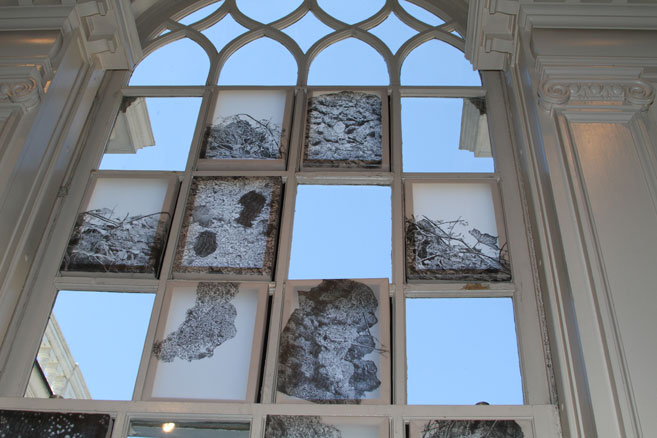 My interest in paradoxes that manifest as objects, events, spaces or places is explored through a dual existence of a grotto that is found on the grounds of the Mansion at Strathmore. It occupies a very particular position at Strathmore, one that is both physical and conceptual at the same time. While this coral structure exists physically in the backyard, it also exists conceptually as a reminder of what the mansion’s function was (home to the Sisters of the Holy Cross)  at one point in time, leaving a trace of its open history. The meaning this grotto once held is de-contextualized and forgotten while the Mansion itself has transformed and adapted to different functions.

The installation re-contextualizes the grotto by integrating the drawings into the architecture at Strathmore, giving it a new meaning by way of adaptation, intervention and interaction with different elements including the window structure, the sky and landscape in the background and the architecture on the inside and the outside.

This site uses Akismet to reduce spam. Learn how your comment data is processed.